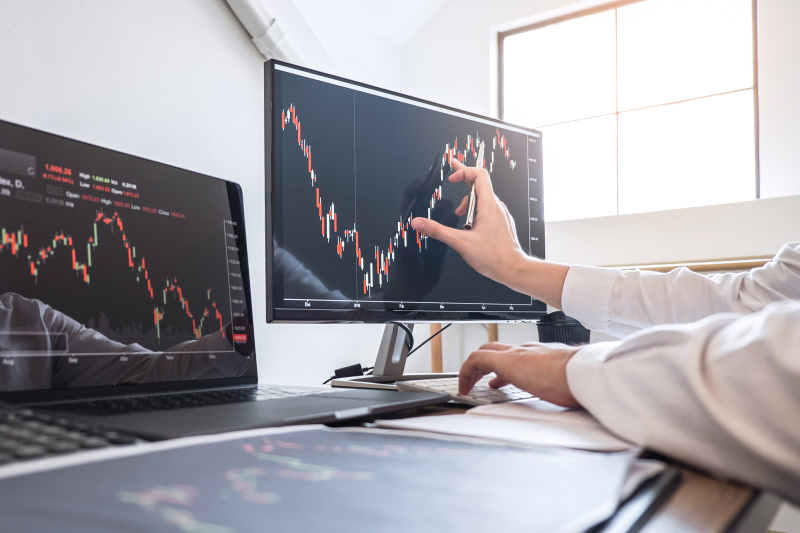 If you were left scratching your head by the recent surge in GameStop stock and wondering how it was possible, you’re not alone. While the resulting “GameStop short squeeze” was an unusual situation, it holds some valuable lessons for traders.

In short-selling, traders essentially “borrow” shares from people who already own them. They’re reserving the option to buy the stock back once it declines in price, allowing them to return the shares for the lower price and pocket the difference. However, if the stock price goes higher, things can go south for these short sellers quickly.

When the shorts are no longer available, or if the stock rises in value, investors must either cover them at a loss or increase their investment to margin their position. The more purchases of a stock, though, the higher the price rises — causing extreme losses if an investor doesn’t exit the trade in time.

If the number of shares available to borrow plummets, as typically happens for a stock that doesn’t appeal to most investors, traders also face higher costs to borrow the shares. Some short-sellers take this as a sign of opportunity. What we learned from the GameStop short squeeze is that this isn’t always the case.

What Happened With GameStop?

Near the end of January 2021, the value of GameStop (ticker: GME) skyrocketed after people from the Reddit group, r/WallStreetBets, purchased shares of GME stock and pushed the stock’s value higher. This resulted in a short squeeze: a phenomenon in which a stock’s value rises sharply and unexpectedly, causing those who bet the other way to buy up shares to cover their short positions. In response to this squeeze, investors who had bet on GME’s decline now had to scramble to cover their losses.

Once the Redditors began their purchases, GME began to rapidly rise in price. Short-sellers began to panic. As GME continued to skyrocket higher, the shorts had to cover their positions by buying more shares to pay back the ones they borrowed.

The resulting effect multiplied as the shorts kept getting shorter, causing those investors to have to buy more. This, in turn, drove the stock price ever higher. The result? GME experienced a whopping 1700% growth in just under a month.

While GME’s value has dropped to normal levels, many of the hedge fund’s short-sellers experienced record losses, simply because there was temporarily no limit to the stock price. Those short positions placed those investors in an untenable situation: they were unable to exit without taking at least some loss.

What Traders Should Know

What can traders take away from this phenomenon? First, that trading during a short squeeze is exceptionally risky. While some of the Reddit investors did walk away with exceptional profits, many lost a lot of money. Meanwhile, short sellers were unable to stop the hemorrhaging.

So, always thoroughly research any stock before trading, and be cautious when shorting a stock. Even a bit of positive news about the company can boost the price, which could place you in a position to take a loss. To learn more about how to identify and prepare for a short squeeze, check out Short Squeeze: What It Is and How To Make The Most Of It written by Alexander of daytradingz.com.

For more, check out Lex and Mark’s run-through here.

InvestFly. Check them out

Great product from InvestFly. Please check them out

Advanced traders know that a basic platform just won’t cut it when it comes to serious trading.

Tradier Brokerage has announced today that Paul H. Lee has joined the company as Senior Vice President of Operations.